When the going gets tough, and it often does when one attempts ‘advanced living,’ what do you do?

After my weekend in Canada, my week was a rough come down. My period started; I was physically exhausted and sleep deprived. My son turned five and we threw a larger than usual birthday party. My in-laws came to town. And my husband and I took some risks while at the same time excavating some intense relationship stuff. Did I reach out to friends? Did I fall back on the foundations of my spiritual practice? Did I use my tools? Yes, no, and no.

Now that we are coming down from the intensity of the last week I see how helpful finding some time to sit in meditation would have been. To have made kala daily. To make offerings and ask for my Allies’ assistance. The 5 minutes I spent crying in front of my altar, telling any thing that would listen that I’d really screwed things up, could have been better spent. But it was an honest outpouring.

Now begins the rebuilding and  a sort of starting over. Back to the cushion for sitting practice. My head will surely be filled with every possible distraction. Back to the cup for kala, for endless, needed purification. Back to reaching out, for connection and guidance and honor. Now that I’m more clearheaded I can remember to sink down deep, into my core, aligning all my souls.

I am reminded of a story I’ve heard about O Sensei, the founder of Aikido. A student asks him, “Why are you never off center?” He replies, “I fall off center, but I return to center so quickly you do not notice.”

That is the goal of daily practice, is it not? My only consolation is that even though I ‘forgot’ my tools this week, I find that I’ve come back to center so much more quickly than I would have before. My partner and I worked through our issues faster and more smoothly than the last time. I’ll be out of the weeds before I know it.

I went to Canada, into the woods, and thought I was going on vacation. How wrong I was.

I expected fun, laughter, and trees. I got all of that. Fun was had, in a variety of forms. There was laughter. The grey mists against the deep greens of the trees and floating on the surface of the lake fed the Alaskan part of my soul. The camp site was not as spectacular as I’d hoped and the food wasn’t very good. But it was the surprises…… Oh, the surprises. 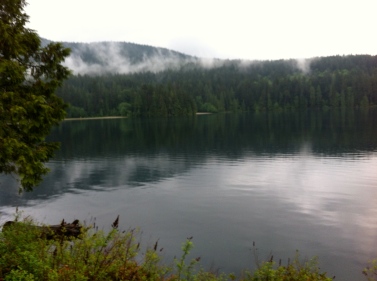 The first great surprise was mead. I’d never had mead before. It seemed like every Canadian brought mead, most made their own, and it was good. One new friend is an exceptionally gifted mead maker; his pomegranate mead was divine. It made a fitting offering to the Red Goddess. I also discovered something called St. Germain, which tastes like spring flowers at sunrise.

The second surprise was meeting the founder of the Pomegranate: International Journal of Pagan Studies. Many Pagans are very smart and well-read, but I wasn’t expecting to get my academic geek on.

The third surprise was the rituals. I have mixed experience with ritual. Most of it bad, bland and ineffective. Occasionally, distasteful. Thankfully, the main ritual leaders, the Coru Cathubodua, come from Anderson Feri backgrounds (as do I) and so their style was familiar and welcome to me. The main ritual, while not particularly spiritually profound for me, was perhaps the best ritual theatre I have ever experienced. It was not all that elaborate, rather the simplicity of the ritual allowed the power and beauty of bodies, chant, and fire to express the heart of primal Paganism.

The last ritual I attended was the Women’s Mysteries ritual. I was doubtful. I love being a female bodied, child-bearing woman, but I loathe gender essentialism and the false dichotomy that ‘women’s mysteries’ and ‘men’s mysteries’ all too often entail. I need not have worried. The ritual was beautiful, powerful, profound. I think each woman stood taller and stronger afterward. Another surprise here, besides having positive ritual experience, was that I felt the Blessed Virgin make an appearance. After such a long absence, she snuck up on me and asked that I recognize her. And then the starry crown she wore, bathed in blue, merged with the Red Goddess, and I learned of her/their power of Love. She gave me much to think about, to feel about, to sort out.

Lastly, my single greatest surprise was the community. Community has long been a source of confusion for me. It is a core value for me. I am fiercely loyal and love strongly. The older I get the more I realize just how little we ever do on our own. We rise higher because of the tallest around us, and we all suffer and struggle a little more if those around suffer and struggle. But moving around makes it hard to commit. These days my strongest community are my liked minded friends, but we are spread out over the world, interacting through blogs, email and Facebook. I have missed in person connection something fierce. While I expected to meet new friends, I was not expecting to find what can only be described as a home.

The Canadian Pagan community of lower BC is unlike any community I’ve ever experienced. I was overwhelmed at first. I realized, at 37, that I am introvert. It took me a full 24 hours to feel comfortable. In fact, on my first morning I sat by the fire for three hours wondering why I had come and wishing I was back at home. I felt like I had crashed a family reunion. I felt uncomfortable including myself in other people’s conversations. They all knew each other so well and were so happy to see each other.

And then….. I clicked in. I inserted myself when I could. I chose a few people to go deep with. I let myself be confused. I forced nothing.

While there was a certain amount of cliqueishness and some obvious snubbing (no community is perfect, sigh), I felt an acceptance that I have rarely seen at other similar gatherings. I could be as bold or as shy, as wild or as tame as I needed to be; the other attendees accepted and encouraged each person to have the experience they needed to have.

I also witnessed leadership that greatly impressed me. I saw the strength of this community in their firm commitment to their vision for the Gathering, fully committed to where they’ve come from and their ideals, but equally committed to growing the community and encouraging diversity. The fact that people from as far away as Montana, Minnesota and Arizona have made this group in Canada part of their spiritual community speaks the loudest to me. I already drive 140 miles round trip each month for a tiny community of fellow students and my teachers. Now I ask myself, am I willing to drive 4 hours each way for a larger community?

I have many people in my life who are passionate, possibly even obsessive, about their work or their hobbies or their loves. I fall into that camp, as well. It’s important to devote the necessary time, energy, focus and love toward any thing we want to excel at – and I don’t mean excel in a sense that there is something to ‘achieve.’ A thriving relationship takes time, effort, and focus. Finishing a challenging and beautiful book might take those things too.

But to balance and refuel passion we need to know when to let up. When to take a breather. We need to counter intensity with some down time. Overworking one muscle group doesn’t lead to increased strength, rather it leads to overburdened and weakened muscles. If we paint all day, every day, exercising other aspects of our creativity could open up new avenues in our work – and prevent burn out. And so on.

I’m pretty obsessive about my family. I love spending time with my husband and kids. I’m a homebody. So I sometimes have to ‘force’ myself to go out with out them or make dates with other people (not playdates with kids!). I’m obsessive about the magickal/spiritual life. I have to get myself to read outside of my subject area from time to time.

Nothing to excess. Find balance. Be well-rounded. Does this lead to all things in moderation? Funny, I find ‘all things in moderation’ to be bland, but have no issues with ‘nothing to excess.’ I guess I think to keep everything in moderation, means never getting fired up. Never getting obsessive about something. Never realizing that you’ve forgotten to eat because your book was so good. Or realized you’ve been talking with a fascinating person for 5 hours. Never having one glass of wine too many. I don’t view those things as excess really. A life without passion or intensity doesn’t seem like living to me!

Today I am leaving on vacation. I am going to Canada. Without my family. It’s been nearly a year since I did something longer than 4 hours without them. I am ready to recharge my batteries.

I’m headed to the Gathering For Life On Earth. Pretty cheesy name, but so far, I’ve found the people on the FB group friendly and the list of activities enticing. Plus, it’s only an hour or so outside of Vancouver, BC, so it is guaranteed to be beautiful. It’s been a decade since I’ve been to Canada. I love Canada.

Besides being in a positive and beautiful place, where I don’t have to cook or look after anyone other than myself, I am excited to meet new people in the wider Pacific North West, to see an old friend from ym California days, and get a hearty dose of ritual. It will be a balm to my chafed energy levels. I’m particularly excited to meet Sarah Lawless in person, as well as experience ritual by the Coru Cathubodua, a group I’ve heard so much about.

I’ll report back next week. Have a great weekend everyone!

Last night I was chanting Om Namah Shivaya. My son, who will be 5 at the end of the month, was listening.

“Mama, do some chants for Kali,” he said.

“I’m chanting to Shiva right now,” I answered. “We can do some chants for Kali tomorrow.”

With such conviction he said to me, “Shiva and Kali are the same, Mama. Shiva is just a nickname for her.”

There’s something to think about. 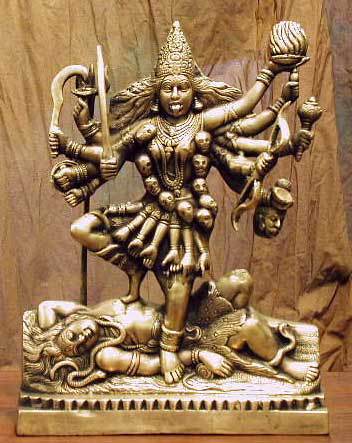 Kali and Shiva. I found this beautiful murti posted at anglohindu.wordpress.com